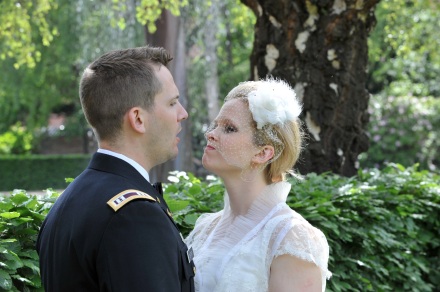 Before we get started: We have been thinking that, for our 11th anniversary, we want to write about how hard marriage is. We want to be vulnerable. We want to write about what we believe marriage is for and why we’re determined to stick with it, in spite of how difficult it is. What we don’t want, in any way, shape, or form, is for someone to read this as a judgment against them. We’re writing from our particular context. Our marriage is not anyone else’s marriage, and if you or someone you love is divorced, we do not presume to judge your decision or the reasons behind it. We love you, and we hurt with you for what may have been lost. Please know that the purpose of this post is not to pass judgment, but to share our reasons for being/staying married, and, God willing, to encourage others.

Today, we celebrate our eleventh wedding anniversary. Last year, we wrote about our celebration of the sacrament of marriage on our tenth wedding anniversary, when we were crowned. This year, we decided to sit in our favorite Tulsa coffee shop (thanks, DoubleShot!) and write about how difficult marriage can be, and how, because of what we believe marriage is, those difficulties are actually an important part of what marriage is, and will potentially (God willing) lead us closer to Christ and to one another.

We met at the Church of Christ University Center in Stillwater, OK, while Kristen was working as a hairstylist and John was in vet school. We got to know one another through a mutual group of friends, and spent time together, but neither of us wanted to have a serious relationship. John graduated in 2005, and was subsequently stationed in Vicenza, Italy; in the fall of 2006, Kristen moved to Chicago to work in a salon there. We stayed in touch during this time, but shortly after Kristen moved to Chicago, John realized that he wanted to spend his life with Kristen, and spent the next six months convincing her that this was a good idea. We got engaged in March 2007, when John was in the States for training. Kristen visited John in Europe for two weeks that fall; this was the only time we were able to see one another during our engagement. We did marriage counseling with an Army chaplain, over the phone. We met in Copenhagen, Denmark on May 29, 2008; Kristen had arrived two days early, but John arrived that morning, in his Army dress blues. We met at the hotel, stored our luggage, and headed to city hall, where we were married. We spent the next three weeks making our way south by train to Vicenza, where John finalized his move from there to Naval Station Great Lakes, just north of Chicago.

We both remember the first six months of married life in Chicago as going well. We were learning how to settle disagreements, and to reconcile when things got heated, of course, but everything still had that newlywed glow. At least, that’s how we remember it 11 years later. However, in the fall of 2008, John was informed that he would be going to Iraq for a year, and that he had three weeks before leaving. He left on November 29, on our six month anniversary.

Seeing They Might Be Giants in Chicago shortly after returning from Iraq (2009).

It would be difficult to exaggerate the impact that this deployment would have on our marriage and our lives. John was a veterinarian, taking care of military working dogs; he was not a direct combatant. Still, being apart for that year was extremely difficult. When we did speak on the phone (Skype/FaceTime weren’t readily accessible), we often got into arguments over what, in retrospect, were usually silly things. When John returned in the fall of 2009, we felt extremely disconnected.

This was compounded by the fact that John had been exploring the Orthodox Church in Iraq, and becoming more and more convinced that it was the best place for us. Kristen was not at all comfortable in the Orthodox Church. The year following John’s return from Iraq was incredibly difficult. We fought about everything – how we spent time; how we spent money; whether to drive or take public transportation; where to go to church; whether and when to start being open to having kids…

Hiking in Iowa on our eighth anniversary (2016).

We didn’t fight well, either. We have very different ways of dealing with conflict, and while it’s gotten better over the course of 11 years, we still struggle with this. The first few months after John’s return, during particularly heated arguments, Kristen would ask if John wanted or was thinking about divorce. At some point during that time, at a time when we were not fighting, we sat down and agreed that we would not allow divorce to be something that we talked about or considered, either individually or together. We agreed to unequivocally trust one another’s commitment to our marriage. This was probably the single most important conversation we’ve had as a married couple.

Meanwhile, our growing involvement with the Orthodox Church (including Kristen’s slow but steady acceptance of and appreciation for it) led us to a deeper understanding of what Christian marriage is. We discuss this in part in last year’s post, by examining the prayers found in the crowning service. In terms of learning to work through (and even benefit from) our struggles, we’ve been thinking a lot about marriage as martyrdom. Ultimately, the mystery of marriage is tied to the mystery of Christ’s relationship with his church, as Paul explains in his letter to the Ephesians. We are called to imitate Christ’s love for his church in our love for our spouse – to be willing to give up everything for the other, who in all honesty does not deserve this sacrifice on our part. We do this in order to participate with Christ, to become ever more like him; to be ever more united to him. This is the true purpose of marriage: salvation.

Marriage is still hard. We still fight about lots of things – how we spend time, how we spend money, how to raise kids… We still have very different ways of dealing with conflict, and we continue to strive to learn how to navigate conflict and to reconcile in service to one another, and to give ever more selflessly (something that having children has helped us learn, without question). However, as we continue to struggle, and to discover new struggles, we do so with the understanding that the struggles are opportunities for us to learn how to die to ourselves every day (usually multiple times a day), to love the other selflessly, and (by means of his grace) to unite ourselves to Christ.