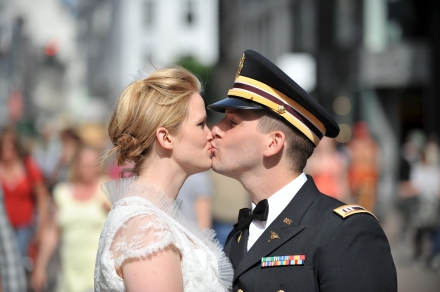 If you receive our monthly newsletter from Christian Veterinary Mission (and if not, sign up here), you probably know that we celebrated our tenth wedding anniversary by undergoing the wedding ceremony in the Orthodox Church, which is often referred to as being “crowned.” We were blessed to celebrate this occasion on the Feast of Pentecost, May 27, 2018, at All Saints Orthodox Church in Chicago, the parish where Kristen and I joined the Church, and where Charles Maximus was baptized.

This ceremony was a long time coming. Kristen and I were engaged in March 2007, while she was living in Chicago and I was stationed in Vicenza, Italy. We decided to get married in Europe so that we could honeymoon there and I could finalize my move from Vicenza to Chicago, where I was to be stationed at Naval Station Great Lakes. Because we were told that Denmark had the most straightforward marriage laws for non-citizens, we decided to get married in Copenhagen City Hall, and make our way south to Vicenza by train (stopping, of course, at a few places along the way).

In our minds, there was no hesitation about getting married this way. We felt that we could share and celebrate with friends and family at a reception when we got back to the States (which we did), and that the ceremony was, in essence, a legal technicality. For us, the more important ceremony involved sharing our individually written vows and sharing communion (made up of crackers and wine brought up by room service) in our hotel room. Essentially, our substantial ceremony was a private prayer. 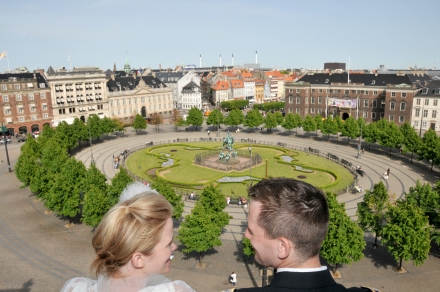 As we began to learn about the Orthodox Church and its approach towards the sacramental nature of our life in Christ, we began to consider when and how we might ask the Church to consecrate our marriage, to make it as fully a sign of Christ and his Church as possible. When I was first learning about the Orthodox Church in Iraq (in 2009), I vividly remember asking the Orthodox chaplain, Fr. Stephan, whether we would have to be married again if we joined the Church. “No,” he replied cheerfully, “but you may well find that you want to be crowned someday, and you may very well have some little ones in tow when you do.” How prophetic his words turned out to be.

Essentially all of our theology of marriage (i.e., our understanding of the nature and τέλος, or purpose, of marriage) can be found in the marriage rite itself. The first prayer of the service contains the following list of requests:

Deacon. In peace let us pray to the Lord.

For the servants of God, N. and N., who are now being united to each other in the community of marriage, and for their salvation: ℞

That he will bless this marriage, as he blessed that in Cana of Galilee: ℞

That he will grant unto them chastity, and of the fruit of the womb as is expedient for them: ℞

That he will make them glad with the sight of sons and daughters: ℞

That he will grant unto them the procreation of virtuous offspring, and an upright life: ℞

That he will grant to them and to us all our petitions which are unto salvation: ℞

Pride of place goes first to the salvation of the couple, second to their chastity, and third to their fecundity! Not the typical primary goals we often think of for a married couple!

Remember, O Lord our God, thy servant, N., and thy handmaid, N., and bless them. Grant them of the fruit of their bodies, fair children, concord of soul and of body: Exalt them like the cedars of Lebanon, like a luxuriant vine. Give them seed in number like unto the full ears of grain; that, having sufficiency in all things, they may abound in every work that is good and acceptable unto thee. And let them behold their children’s children, like a newly-planted olive-orchard, round about their table; that, obtaining favour in thy sight, they may shine like the stars of heaven, in thee, our God.

The final prayer before the crowning asks God to:

…stretch out now also thy hand from thy holy dwelling-place, and conjoin this thy servant, N., and this thy handmaid, N.; for by thee is the husband united unto the wife. Unite them in one mind: wed them into one flesh, granting unto them of the fruit of the body and the procreation of fair children.

So there’s a pretty clear and self-evident theme here. Kristen explained the significance of the crowning in our June newsletter, but for those who’ve never seen one, I like this (very abbreviated) dramatic portrayal (although ours was in English). 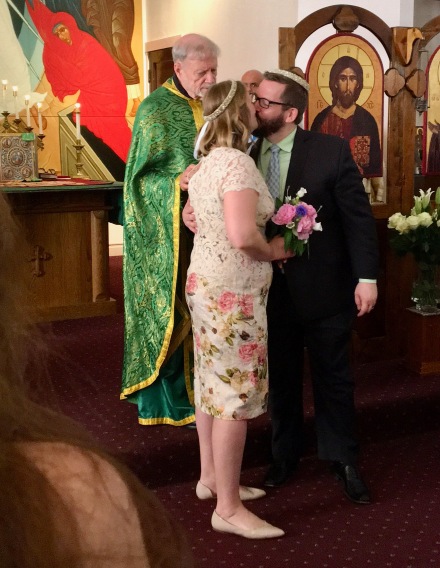 The Epistle and Gospel passages read during the wedding service are very telling, as well. Near the end of Paul’s letter to the Ephesians, Paul concludes his comments on the interaction of husbands and wives with the statement:

No one ever hated his own flesh, but nourishes and cherishes it, just as Christ does the church, because we are members of his body. “Therefore a man shall leave his father and mother and hold fast to his wife, and the two shall become one flesh.” This mystery is profound, and I am saying that it refers to Christ and the church.

The Gospel reading comes from John’s Gospel: the story of the Wedding at Cana, where Jesus performs his first miracle: changing water into wine. One of the wedding prayers states how Jesus, “through thine unutterable gift and manifold goodness didst come to Cana of Galilee, and didst bless the marriage there, that thou mightest make manifest that it is thy will that there should be lawful marriage and the begetting of children.”

Salvation, chastity, fecundity. It should go without saying that Christian marriage is hard. Let there be no doubt about it: Kristen and I struggle and fight for our marriage. The first year was hard. Coming back from Iraq was hard. Having kids while doing a PhD is hard. We fall and get up again, over and over and over. But there is joy as well. There are moments when light shines through (such as being crowned surrounded by our friends at All Saints). And we’re reminded that when we get up, when we ask (and offer) forgiveness, when we sacrifice for one another, we are brought closer to one another, and closer to the One who joined us together unto ages of ages.

Blessed art thou, O Lord, who has crowned us (and continues to crown us) with glory and honor!