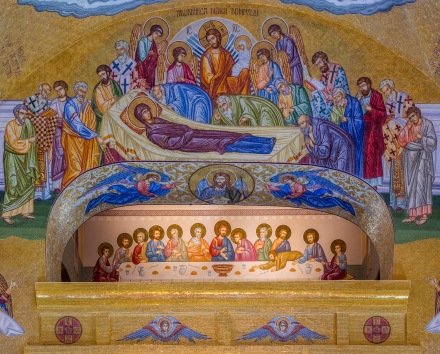 Last Friday, we said goodbye to the body of Betty Coatney, my Pawpaw’s wife of 10 years, whom he married some time after my Mawmaw died. As Charlie and I kissed her cheek for the last time, I couldn’t help but note that it was Charlie’s first time to see (and kiss) a dead body. (We had talked earlier that day about how a dead person’s body looks like it’s asleep, but that the only thing that can wake it up is when Jesus comes back from heaven.)
“Thank you for taking care of our Pawpaw. We love you. We’ll see you when Jesus comes back.”
Yesterday we celebrated the falling asleep of the mother of Jesus (the Dormition of the Theotokos, celebrated on August 15th each year) by attending the Divine Liturgy. As Charlie and I leaned in to kiss the icon of Mary, resting on her bier, I said to him, “See, she’s resting in her coffin, waiting for Jesus to wake her up.” His response: “Like Nana Betty?”
Yes; just like Nana Betty.
I’m so grateful for the Christian understanding and love for the bodies of the deceased. The priest at Holy Apostles, where we usually go when we’re in Tulsa, noted in his homily yesterday the words of St. John of Damascus from the eighth century:

In the Law, anyone who touched a corpse was accounted unclean (Num. 19:11). But these of whom we speak are not dead. Because Life itself and the Author of life was reckoned amongst the dead, we do not call these dead who have fallen asleep in the hope of resurrection and in the faith in Him.

What a gift! That which was once unclean becomes clean! That which we once were right to fear no longer has any hold over us!
Kristen, Charlie, Judah, and I waited graveside as the attendants lowered Betty’s casket and prepared to fill the grave. As I helped Charlie empty a shovel-full of dirt onto the vault, I heard the words that conclude St. John Chrysostom’s most famous Easter homily:

Let all partake of the feast of faith. Let all receive the riches of goodness.

Let no one lament their poverty, for the universal kingdom has been revealed.

Let no one mourn their transgressions, for pardon has dawned from the grave.

Let no one fear death, for the Saviour’s death has set us free.

He that was taken by death has annihilated it!

He descended into hell and took hell captive!

He embittered it when it tasted His flesh! And anticipating this, Isaiah exclaimed: “Hades was embittered when it encountered Thee in the lower regions“.

It was embittered, for it was abolished!

It was embittered, for it was mocked!

It was embittered, for it was purged!

It was embittered, for it was despoiled!

It was embittered, for it was bound in chains!

It took a body and came upon God!

It took earth and encountered Ηeaven!

It took what it saw, but crumbled before what it had not seen!

O death, where is thy sting?

O hell, where is thy victory?

Christ is risen, and you are overthrown!

Christ is risen, and the demons are fallen!

Christ is risen, and the angels rejoice!

Christ is risen, and life reigns!

Christ is risen, and not one dead remains in a tomb!

For Christ, being raised from the dead, has become the First-fruits of them that have slept.

To Him be glory and might unto the ages of ages.